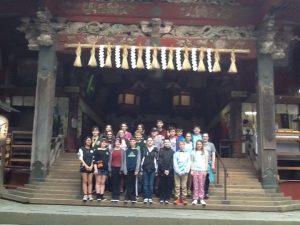 In 1959, a typhoon raged through Yamanashi Prefecture, Japan. It caused great losses to human life, houses, livestock, and farm ground. When Iowa Sergeant Richard Thomas (who had vacationed in Yamanashi while stationed in Japan) heard about this disaster, he reacted strongly to the news and asked the people of Iowa to help the people of Yamanashi. As a result, Iowans donated thirty-five breeding hogs and 100,000 bushels of corn to Yamanashi to encourage their recovery. This act of humanity and goodwill opened the door for an act of friendship.

Iowa and Yamanashi became Sister States in 1960 – the first Sister State relationship between the United States and Japan. Since then, Iowa and Yamanashi have participated in countless exchanges in fields such as education, art, music, aging, agriculture, and sports. Besides forming a Sister State, the goodwill demonstrated to Japan by the people of Iowa changed US-Japan relations, easing tensions between the two countries. Today, Japan is the United States’ fourth-largest trading partner. Based on 2012 figures, Japan is Iowa’s third-largest trading partner. Over the years, Des Moines Public Schools has built a special relationship with the people and schools of Kofu, Yamanashi’s capital city.

In 1993, Yamanashi sent $300,000 to Iowa to assist in flood relief. This spring, Iowa Sister States asked Iowans to assist Yamanashi again. The prefecture received an enormous amount of snow earlier that year, which caused a great deal of damage to their agricultural sector.

In 2014, Iowans provided immense support to the citizens of Yamanashi when their agriculture sector was devastated by severe winter weather. As of March 2nd, 2014, the agriculture-related damage was estimated at 17.1 billion yen ($168 million). The Yamanashi Relief Fund was created to accept donations to help our friends in Japan.

On March 18th. 2014, the Principal Financial Group contributed to Yamanashi disaster relief by creating a $10,000 grant. They used this grant to challenge other Iowa companies to come together to raise a total of over $30,000 to send to Yamanashi.

On May 22, 2014, Yamanashi governor Shomei Yokouchi hosted an official ceremony in Kofu, Japan to accept the funds raised in this relief effort. Laura Silka was able to attend the ceremony as the Iowa Sister States representative. (Laura studied at Yamanashi Prefectural University through the Yamanashi Research Scholarship.) She presented the official check to Governor Yokouchi and received his formal letter of the thanks to the citizens of Iowa.