Kofu is the capital city of Yamanashi prefecture (a prefecture is similar to a state), which is known for its natural beauty, hot springs, wine, and jewelry. With a population of over 200,000, and its distinct four-season climate, Kofu 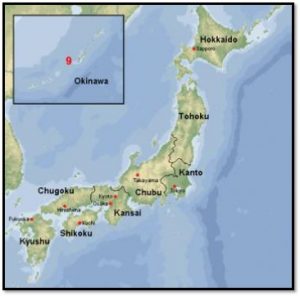 maintains a casual atmosphere where people greet each other while out for a morning walk along the river road and the kindness of strangers is the norm. Although the daytime dinginess and nighttime hustle and bustle of Tokyo is a mere 90 miles to the east, Kofu’s nestled location among the Southern Alps and the Chichibu mountain range helps to keep the gentle pace of life here.

Yamanashi is located near the center of Japan’s main island. It is one of the smaller prefectures in Japan (32nd in size), and Kofu is its capital city. On clear days, Mt. Fuji stands guard over this basin area that constitutes Yamanashi prefecture. Kofu is surrounded by mountains, which means students and chaperones will be living in a giant bowl for about a week.

People have occupied this area for about 30,000 years. The area is most famous for the historical figure of Shingen Takeda (last name, first name) who was a fierce warlord that tried  (unsuccessfully) to unite and control Japan during the 16th century (a Japanese time period called the “Warring States”). Shingen is memorialized with a statue near Kofu eki (train station), and by an annual festival held in his name.

After the Japanese Emperor regained control of the country in the 19th century, he gave this prefecture its current name on November 20, 1872. This day in November is known as Yamanashi Foundation Day and is celebrated every year.

In World War II, the Allied forces targeted Kofu for heavy fire bombing due to its industrial areas. Roughly 90% of Kofu was obliterated. Many of the schools in which you will visit were built in the late 1940s when Japan rebuilt their country after the war.